Posted on May 13, 2019 by storiesretoldblogger

Today it was still very rainy, cold, and windy, however, after breakfast we walked through the historic district of Philadelphia. On foot is certainly the best way to tour this area.

It is only a few square blocks in size, but we saw so many historic places and heard so many stories about the birth of our nation. The Betsy Ross House, Independence Hall, Christ Church, Christ Church Cemetery (where Benjamin Franklin is buried), Penn’s Landing (the port area where Johann Michael App arrived on the ship St. Andrew on September 23, 1752), the Liberty Bell, Independence Hall, the Free Quaker Meeting House, Washington Square, and dozens of other places are monuments to our American heritage.

As coincidence would have it Pius’ brother, Urs App, was actually in this historic district selling ice cream when he was working on his doctorate in the 1970’s. He was the first of our family to be so close to the location of the arrival of the Apps in America… but without being aware of it.

This is a place that every American should visit to really understand the effort that was put forth by these brave and courageous men and women so that we can enjoy our liberty and freedom. This is the spot. This is “ground zero” for the beginning of today’s America. The importance of this area is not to be taken lightly and a visitor will come away with an enormous appreciation that he did not have beforehand. 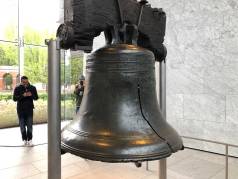 The Liberty Bell… The World’s Symbol for Liberty.

Inside the Liberty Bell display.

Inside the Liberty Bell display.

John Barry, the father of the American Navy. 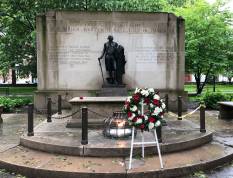 The display building for the Liberty Bell.

Pius App in front of the Museum of the American Revolution.

At the Museum of the American Revolution. 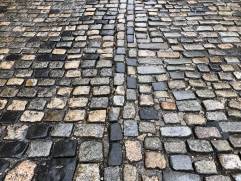 An entry to the Christ Church Burial Ground where Benjamin Franklin is buried. 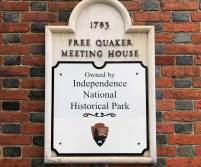 Quakers are pacifists, but during the Revolution various Quakers were inspired to assist in the conflict. After being expelled from the main community of Quakers, the group of approximately 200 called themselves Free Quakers and founded a meeting house of their own in 1783. 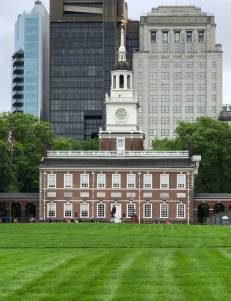 I am an Elkhart, Indiana native and became interested in applying video to history when consumer video cameras were first introduced on the market in the late 1970’s. My production company, Stories Retold, specializes in preserving oral history, traditions, and values with video. Primarily interviewing individuals, I sometimes document families, and on occasion document an entire community. My niche is developing a personal relationship with clients which helps me to tell their story just the way they would like to have it told. Everyone has a story worth preserving, and I enjoy discovering interesting stories from people with whom I come into contact on a daily basis. In years to come, these videos will be priceless as they portray original stories complete with visual images and actual voices filled with all the primary material and emotion that was intended to be. I gain a strong sense of personal satisfaction with each completed project whether it involves an individual or an entire community.
View all posts by storiesretoldblogger →
This entry was posted in US East Coast Drive with Two Cousins: One Swiss & One American. Bookmark the permalink.