Posted on August 25, 2017 by storiesretoldblogger

We left our motel in Redding at 7:15 am today and headed north to Crater Lake in Oregon. Retracing our path from Friday we passed Mount Shasta and what a sight it was. Driving to Redding yesterday we could see him from 50 miles (80 km) south, and today he could still be seen from where we ate breakfast 75 miles (121 km) north. Mount Shasta is a volcano and so it stands alone in what looks like lava beds. Because of this, it the view is not obstructed… and it helps that it is 14,300 feet (4,359 M) tall.

As we were driving northward we first entered the Klamath National Forest and it is one of the most beautiful forests of its kind. Evidence of past forest fires could be seen. There were a couple of very large and wide open flat places such as “Butte Valley”. These were being farmed with crops and also were irrigated.

We ate breakfast at “Cinders Cafe” in Worden, Oregon (just south of Klamath Falls, Oregon) which isn’t really a city. It’s more of a few buildings along the road, but the café was genuinely as local as it gets and Cinder took very good care of us.

We entered the Crater Lake National Park at the south entrance. The lake itself is circular so it is possible to drive all the way around it, but today most of the road on the eastern side was closed because of snow that still remains from last winter’s enormous snowfall.

Our destination for today is Eugene, Oregon. When we arrived we ate supper outside at the Elk Horn Bar which was only about a mile from the motel and nearby Oregon State University. Tomorrow we are driving toward Portland, Oregon on our way back to Seattle and the Seattle Marriott Waterfront hotel. 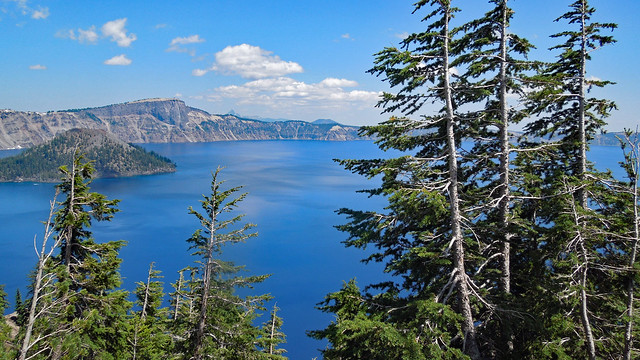