US West Coast Drive with Two Cousins: in Jamestown

Posted on August 22, 2017 by storiesretoldblogger

It is nice to spend the day relaxing instead of driving, and it is especially nice to spend it at the home of our cousins Lois & Jerry O’Day on their OD Ranch. In the morning, before the temperatures got too hot, Lois & Jerry took us around the Jamestown area on a driving tour.

Our first stop was a visit to the extinct town of Quartz Mountain (near Jamestown, California) where the App gold mine was located.

We saw the spot where John App noticed an outcropping of quartz that contained gold. Because of this, he decided to locate the mine near this spot. The above ground portion of the mine is gone now, and a house has been built on top of the hill where the mine buildings once stood, so we drove up and took some pictures. John App was considered the foremost authority on quartz mining in Tuolumne County, California and the App Mine generated millions of dollars of gold (by today’s value of money).

We Apps are unable to visit Quartz Mountain without photographing the App Street sign… especially with us standing in front of it. Pius brought the German connection of our family to it when the photograph was made.

Near Wood’s Creek, just outside of Jamestown, is where John App built a home in 1852 for himself and his wife Leanna. It was built with lumber from the Algerine Mill. The town of Algerine (about 4 miles, or 6.5 km south) no longer exists, but was a “shoot ‘em up town” in its day. The house is vacant and has fallen into mild disrepair, but with its solid structure it is still sound and livable. Many people are hoping that it is restored as an historical monument to John App and Leanna Charity Donner App.

John and Leanna are buried in the Jamestown Cemetery, just outside of Jamestown and near the homestead. We visited it next. The cemetery is located on a hillside where a wrought iron fence encompasses their graves. Pius said that this is the kind of fence his grandfather would have created, and that if he came here alone, and didn’t know where the grave was, he would have automatically gone to this spot.

Detwiler Wildfire with a temperature inversion

In the late afternoon we noticed a plume of smoke about 15 miles (24 km) to the southwest. It was a wildfire that had started in Mariposa County and later called the Detwiler fire. Many fire units and airplanes were dispatched immediately but the temperature was 100 and the winds were blowing. It quickly grew that day to 7,000 acres (28 sq km) and eventually consumed 82,000 acres (332 sq km) before it was under control several weeks later. It was a large fire, even by California standards, and made the national news. Over 4,000 people were on the ground fighting the fire along with 550 fire engines, 20 helicopters, 90 bulldozers, and 1 DC-10 jet that dropped thousands of gallons of water at one time. 60 residences were destroyed, but the town of Mariposa was untouched.

In the evening Lois hosted a family get together on the OD Ranch with about 15 family members. This connected our German App roots with our American App family members who helped settle the west. John App would surely have never expected our Swiss cousin (Pius App) to visit and make that connection possible. Not many families have such a rich history and connection as ours.

Tomorrow our Destination will be Tulare, California to visit our cousin, Patricia Hillman. 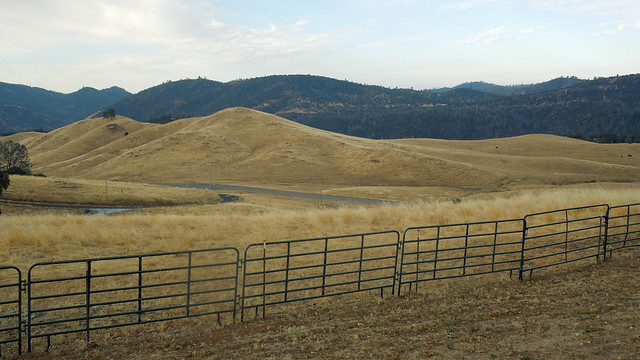