US West Coast Drive with Two Cousins: to Jamestown, California

Posted on August 21, 2017 by storiesretoldblogger

We left Redding, California in the morning and drove down some scenic highways to Grass, California and the Empire Mine… actually, it was a collection of mines in the olden days. It was here in this area where John App arrived from his westward journey in 1850. This is where he learned, and helped develop, quartz mining techniques. Quartz is a mineral that can have gold embedded in it. The ore is crushed in a stamp mill, the rock is washed away, and the gold remains. We visited some of the mine buildings and the mine shaft itself to get a general view of how quartz mines were set up to do business.

From here we drove (despite my awkward navigation) to Donner Lake, Donner Pass, and the Donner Camp near Truckee, California.

This beautiful view toward the southeast from Donner Camp in the Sierras is a favorite of mine, but it had a much different context 170 years ago. Across the far mountains is Lake Tahoe. Donner Camp is where George Donner and his family and his brother, Jacob Donner and his family, camped during that terrible winter of 1846-47. George was the leader of the Donner Party and was behind the main group of people because he needed to repair a broken wagon axle. That night it snowed 3 feet (.9 M) leaving them stranded. The others of the party were already near the east end of Donner Lake, about 6 miles (9.7 km) further, where they were forced to camp during the winter.

John App’s future wife, Leanna Donner, was the second oldest daughter of George Donner and survived the ordeal at age 12. I often wonder how the sound of the wind through the pines affected her in later years. To us it may be a calming and restful sound, but to her it may have conjured up unthinkable memories.

From here we drove to Auburn, California (where the temperature began at 100 degrees) and drove the scenic, and historic, Highway 49, all the way to Jamestown, California. It has a beauty all its own with twists and turns and hills with sometimes large elevation changes. It follows on top of the Mother Lode and many of the original mining camps still exist today but with, of course, a different “look”. Cool, Angels Camp, Volcano, and Rough and Ready are some of the unique names of historically important, and interesting, sites where miners sought their gold fortune in rivers and digs around the 1850’s. Along the way we had “breakfast” at 3:00 pm… eating establishments were difficult to find along our route today. In the west stopping places are sometimes very far between.

Sunset at the OD Ranch

In the evening, when we arrived in Jamestown at the OD Ranch, Lois and Jerry O’Day (our cousins) put on quite a spread for us. That is cowboy talk for a big supper. It is always one of my favorite things to talk out on their west deck in the evening and watch the sun go down. Pius took some great photographs of the sunset and some of my favorites are his panoramic photos. 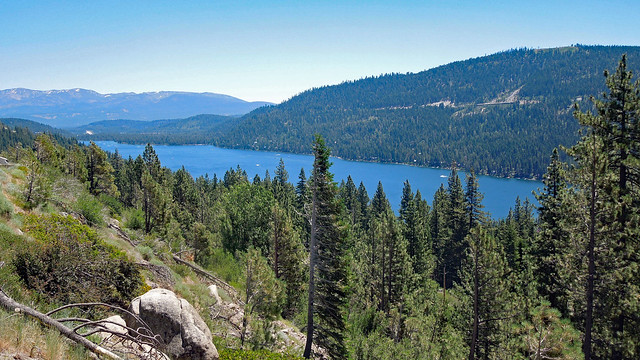 1 Response to US West Coast Drive with Two Cousins: to Jamestown, California