US West Coast Drive with Two Cousins: to Newport, Oregon

Posted on August 19, 2017 by storiesretoldblogger

In the morning we took our luggage from the hotel to the car, which I had temporarily parked in front of some valet parked cars since there was no other space. I don’t know how they did it, but those valets managed to get the other cars out that I was blocking… no one said anything to me about it so I guessed I wasn’t in trouble.

We drove down the coast to Aberdeen, Washington (the “World Capital of Lumber”, the sign says) to get some breakfast at a local (non-touristy) café. The GPS led me down a one way street… the wrong way. Once I got that straightened out, we walking into “Anne Marie’s Café”, ate breakfast, and met Anne Marie herself.

We continued on Highway 101 south through Washington and half of Oregon. We saw trees, trees, more trees, and some of the coastline (the road follows the coast but inland a bit). Our destination was a few miles north of Newport, Oregon at the Inn at Otter Crest with each of our rooms having an ocean view. They told us at the reservation desk that their restaurant was very good and that they cooked very healthy food. We were hungry from the day’s drive and walked to the restaurant. The sign on the door said that they were “closed” and were only accepting reservations for private parties. We thought that we constituted a party of two and that should justify dinner, but the door remained locked. We drove a few miles to Newport and ate at an enjoyable Italian restaurant called “Sorella”.

The weather has been clear, windy, in the 60’s and 70’s (16 – 24 C), and very nice. We stopped and took a few photos of Haystack Rock (below) in Cannon Beach which is probably one of the most well-known stops along the Oregon coast. Tomorrow we leave at 7 am to continue our drive and get some breakfast before arriving at our destination of Redding, California… our first introduction to the 100+ degree heat of summer.

Click this image to see all photos (with descriptions) from the day: 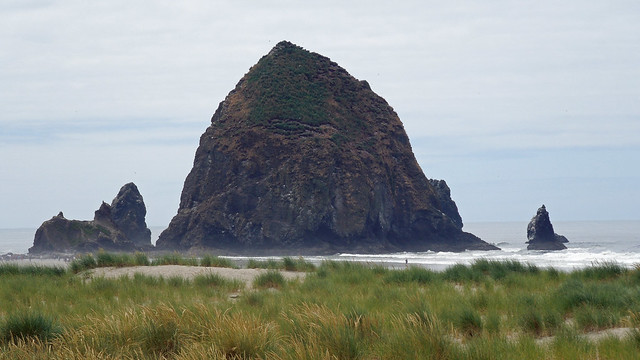 1 Response to US West Coast Drive with Two Cousins: to Newport, Oregon