Following John App’s Journey to California – Summing it All Up

Posted on August 24, 2014 by storiesretoldblogger

I have followed John App’s journey west to California for the gold rush by car for the past eleven years. He left in March of 1850 from Pekin, Illinois where he was the mayor’s assistant, and arrived in what is now Nevada County, California probably in late July or early August of that year at the same time quartz-bearing gold was discovered near present day Grass Valley, California. It was here that he learned how to mine gold from quartz veins.

Dividing his journey into five segments I followed him in 2003, 2008, 2010, 2012, and now in 2014. His hand-written diary ended after segment 4, although it is certain he maintained his diary in another book that we do not have. His segment 5 travels are based on fact, and where there are few facts we can only surmise, based on his character, what he may have done. That is the value of traveling in his footsteps. It is one thing to read his diary and it is something else entirely to follow him on the trail. It is living history at its best when you are there sensing his emotion on the journey… something that can’t be explained, only experienced.

While learning quartz mining techniques first in Nevada County and later in Amador County, John had met Leanna Donner one of the surviving daughters of the Donner Party. At the time she was living near Sonoma, California with her younger half-sister at the home of the Brunner’s (an elderly Swiss couple) who took them in as orphans after they were rescued from being trapped high in the Sierras during the winter of 1846-1847 (see the story of the Donner Party). Sometimes Leanna would travel to Sutter’s Fort (now present day Sacramento). Sacramento was a supply depot for the gold fields and that is undoubtedly where they met. In February, 1852, John wrote Leanna a love poem so we know that an important relationship had been established. In late July of 1852 John was east in the Sierras (possibly prospecting for gold) and joined the Clark-Skidmore Party (a wagon train made up of men from Indiana and Ohio) somewhere along the Carson River trail near where it branches off and follows the Walker River (basically, an unproven trail). It was known for some time that large pockets of quartz-bearing gold were being discovered in the foothills near Sonora, California and all of the men had an interest in getting there as quickly as possible.

Joseph Morehead, a scout, was sent out from Sonora to intercept wagon trains and divert them to that area thus keeping them from going to other mountain camps to mine. Morehead convinced the Clark-Skidmore Party to follow him since it would be a shorter and quicker route. Unfortunately, Morehead did not blaze his trail and missed a critical marker taking them on a much more arduous and lengthy trip out of the mountains. The men were starving and weary. Along the route a mountain lake was encountered that they could not go around and they had no resources or strength to turn back. Thinking “outside the box” they got out their shovels and dug tons of dirt and rock to partially drain the lake so that the wagons could pass over the muddy end of it. This is a very short version of a much longer story about one of California’s most notable pioneer wagon trains, but John App arrived in the Sonora area around the first of September, 1852.

John prospected for gold along the Wood’s Creek area of Jamestown, California before leaving for Sacramento where he and Leanna Donner were married on September 26, 1852. They returned immediately and built a home near Jamestown which still stands today. Over the years John App founded the App Mine (one of the largest gold producers of the southern mines) and owned other mines and properties sometimes as part of the App Consolidated Mining Company. Laurie, a fifth cousin of mine, is researching all of the mines and properties that he owned in the area (Tuolumne County). Big job!

This was a fun research trip for me, but the best was researching with Laurie, being with (and being taken care of by 5th cousins) Lois & Jerry, seeing Ricky and his wonderful family, and interviewing (with video) three other distant cousins Frank, “Tis”, and Patricia (Pat seems more like my California mom, I think). Their stories of the past are now preserved digitally so that future generations can enjoy and learn from them. They have accomplished an important thing by keeping alive a part of the history of true California pioneers that cannot be found in textbooks. Thank you. 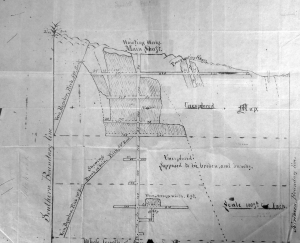 Diagram of the App Mine shaft levels

The 5th cousins at Pinecrest Lake

I am an Elkhart, Indiana native and became interested in applying video to history when consumer video cameras were first introduced on the market in the late 1970’s. My production company, Stories Retold, specializes in preserving oral history, traditions, and values with video. Primarily interviewing individuals, I sometimes document families, and on occasion document an entire community. My niche is developing a personal relationship with clients which helps me to tell their story just the way they would like to have it told. Everyone has a story worth preserving, and I enjoy discovering interesting stories from people with whom I come into contact on a daily basis. In years to come, these videos will be priceless as they portray original stories complete with visual images and actual voices filled with all the primary material and emotion that was intended to be. I gain a strong sense of personal satisfaction with each completed project whether it involves an individual or an entire community.
View all posts by storiesretoldblogger →
This entry was posted in California-Oregon Trail Posts. Bookmark the permalink.